Westport, (Irish: Cathair na Mart, historically anglicised as Cahernamart) is a town in County Mayo, Ireland. It is situated on the west coast of Ireland, at the south-east corner of Clew Bay, an inlet of the Atlantic Ocean. Westport has a town centre designed by James Wyatt in 1780, in the Georgian architectural style. Its layout follows the medieval principles of urban design introduced by the Normans in the 13th century. The design for the town was commissioned by the Lord Sligo of the nearby stately home, Westport House, as a place for his workers and tenants to live. A particular feature is the incorporation of the river into the composition, contained for two blocks by low stone walls producing, on each side of the river, attractive tree lined promenades (The Mall) with several stone bridges over the river Carrow Beg. The layout further includes several tree lined streets, addressed by the narrow fronted commercial buildings typical of Irish towns, though with many here remaining of a singular refinement and charm. Westport was a residence of the pirate chief, Grainne Ni Mhaille, in the mid-to-late 16th century.

Westport House was designed by the famous architects Richard Cassels and James Wyatt in the 18th century, Westport House is considered one of Ireland’s most beautiful historic homes open to the public and is situated in an impressive parkland setting with a lake, terraces, gardens and magnificent views overlooking Clew Bay, the Atlantic Ocean, Achill, Clare Island and Ireland’s Holy Mountain, Croagh Patrick. It was built and is still privately owned by the Browne family, who are direct descendants of the 16th century pirate, Grainne Ni Mhaille, Queen of Umaill.

Westport is a popular tourist destination and has won the Irish Tidy Towns Competition three times in 2001, 2006 and 2008. The Population of Westport (including environs) was identified as 5,475 persons in the census (2006). This was an increase of 19% over the 10-year period 1996-2006. People from Westport town are traditionally known as Coveys. Some decades ago the Covey dialect still existed and was unintelligible to outsiders. For example the Covey word for a woman was a “doner”. To this day inhabitants of nearby areas, including Castlebar, refer to the people of Westport as Coveys.

Westport History : Westport originates and gets its name, in Irish, from a 16th century castle–Cathair na Mart (meaning: The Stone Fort of the Beeves or The City of The Fairs)–and surrounding settlement, belonging to the powerful local sea faring O Maille Clan, who controlled the Clew Bay area, then known as Umaill. The original village of Cathair na Mart existed somewhere around what is now the front (East) lawn of Westport House. It had a high street, alleys down to the river and a population of around 700. It was moved to its present site in the 1780s by the Browne family of Westport House, who also renamed it Westport. Westport is designated as a heritage town and is unusual in Ireland in that it one of only a few planned towns in the country. The design of the town is attributed to James Wyatt, a famous English architect. He also completed Westport House, the stately home of the Marquess of Sligo and designed its dining room. Westport House had originally been built by Richard Cassels, the German architect, in the 1730s, on the site of the original O Maille Castle. The dungeons of the O Maille castle still remain. The most notable feature of James Wyatt’s town plan is the lovely tree-lined boulevard, the Mall, built on the River Carrowbeg.

Louisburgh (Irish: Cluain Cearban) is a small town on the southwest corner of Clew Bay in County Mayo, Ireland. It is home to Sancta Maria College and the Grainne O’Malley Pirate Queen Interpretive Centre. The town was constructed in 1795 by the 3rd Earl of Altamount, later 1st Marquess of Sligo, John Denis Browne of Westport to house Catholic refugees who fled sectarian conflict in the north of Ireland. Originally a planned town, it retains many of the eighteenth century features in style and scale. The 1st Marquess of Sligo named the town Louisburgh in memory of his Uncle – Captain Henry Browne – who fought on the British side, against the French, in the 1758 battle of Louisburg. (Louisburg -or Louisbourg in French- was a French named fortress on Cape Breton Island, Nova Scotia, Canada.)
Louisburgh is built on the Bunowen River, part of which is a salmon fishery. Nearby Roonagh Pier, approx 6 km from the town, is the departure point for ferries to Clare Island and Inishturk. There are a number of amazing beaches in the area renowned for surfing and Horse racing such as Carrownisky beach ( Silverstrand and White Strand are also a must see further west). Each year, on the May Bank Holiday Weekend, the town hosts a traditional music festival – Feile Chois Chuan – which attracts a large number of enthusiasts from many parts of Ireland and abroad.

Newport, historically known as Ballyveaghan (Irish: Baile Ui Fhiachain), is a small picturesque town in the Barony of Burrishoole County Mayo, Ireland with a population of 590 in 2006. It is located north of Westport. on the mouth of the black Oak River thus forming a natural harbour along the shore of Clew Bay. The county town of Castlebar is approx 18 km east of Newport. The Black Oak River flows through the centre of the town and there are pleasant walking paths along its grassy banks.
Newport was established in the early 18th century by the Medlycott family. James Moore, working for the Medlycott Estate, designed the Quay at Newport in a formal layout. The Medlycott family’s land agent was a Captain Pratt. Captain Pratt introduced linen manufacturing to the town under the management of immigrant Quakers who relocated to Co. Mayo from Ulster. It would appear that, although the immigrant Quakers consequently found living conditions in Mayo too difficult, the linen industry picked up in the mid-18th century and for the next forty years or so the town prospered around the industry,[4] but in the early 19th century it again fell into decline as it was superseded as a port by the town of Westport some miles to the south. At the end of the 18th century, the Medlycott Estate was taken over by the O’Donel family who built Newport House overlooking the harbour, which is now a hotel.

Burrishoole Friary is a few kilometers west of the town of Newport, County Mayo, Ireland and was founded in 1470 by Richard de Burgo of Turlough, Lord MacWilliam Oughter. It was built without the permission of the Pope – although later ‘forgiven’. Almost all the friaries and abbeys across Ireland were suppressed in the wake of the Reformation in the 16th century. Very few were rebuilt after that time and now only the ruins survive, pleasing, if poignant, late Gothic relics of what must have been among the most striking buildings in the countryside of pre-Tudor Ireland.

Achill Island – ( Irish: Acaill, Oilean Acla) in County Mayo is the largest island off the coast of Ireland, and is situated off north west from Clew Bay. It has a population of 2,700. Its area is 148 km2 (57 sq mi). Achill is attached to the mainland by Michael Davitt Bridge, between the villages of Gob an Choire (Achill Sound) and Poll Raithni (Polranny). Centres of population include the villages of Keel, Dooagh, Dumha Eige (Dooega) and Dugort. Early human settlements are believed to have been established on Achill around 3000 BCE. A paddle dating from this period was found at the crannog near Dookinella. The island is 87% peat bog. It is believed that at the end of the Neolithic Period (around 4000 BCE), Achill had a population of 500–1,000 people. The island would have been mostly forest until the Neolithic people began crop cultivation. Settlement increased during the Iron Age, and the dispersal of small forts around the coast indicate the warlike nature of the times. Granuaile maintained a castle at Kildownet in the 16th century. Achill Island lies in the Barony of Burrishoole, in the territory of ancient Umhall (Umhall Uactarach and Umhall Ioctarach), that originally encompassed an area extending from the Galway/Mayo border to Achill Head in Co. Mayo.
Achill has many tourist attractions such as surfing, kite-surfing, golf, ancient monuments and the ‘deserted village’. There are incredible beaches and amazing views from the famous Atlantic Drive.

Several festivals are held in and around Westport each year.

The Westport Horse & Pony Show is held on the first weekend in June.

The Sea Angling Festival is held annually in the third or fourth week in June. This is internationally acclaimed and in existence for over 42 years, attracting sea anglers from all over the world.

The annual Croagh Patrick Pilgrimage is held annually on the last Sunday in July.

The Westport Arts Festival is held in the first week of October. This is a festival of arts, music and literature.

The Westport music festival – this five day event will now run annually in July at the Fairgreen. It began July 18, 2006.

The Westport Seafood Festival is held on the October Bank Holiday weekend. There are traditional Irish pubs with a great atmosphere in the local area within a two km radius from the House., 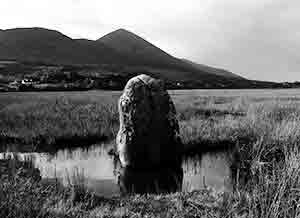 Matt Molloy of the Chieftains has a vibrant musical pub on Bridge Street at the heart of the town. Beergarden in the grounds of Westport house with music venues and food Outdoor Sports and Activities: Westport has become the adventure capitol of the West of Ireland with several competive events such as Gael Force. Westport is a very popular angling centre providing ample opportunties for sea fishing on Clew Bay and game and coarse fishing on numerous nearby loughs and rivers.Westport Golf Club (championship) is currently ranked 43rd out of the top 100 golf courses in Ireland by Golf Digest. It has hosted prestigious tournaments, both the Ladies Home Internationals in 1989 and the Irish Amateur Close Championship on three occasions, most recently in 1997. It also hosted the Irish PGA Championship in 2002.

Clew Bay is a most attractive sailing cruising area for visiting the Islands such as Clare Island, Inisturk Island and Inisbofin Island or to sail up the only Irish Fjord – Killery Harbour.
The Mayo Sailing Club in Rosmony is a vibrant club involved in cruising, racing and sail training in Clew Bay. (see www.mayosailingclub.com)
Glenans Irish Sailing Club (GISC) is a non-profit sailing school affiliated to, but currently independent of the larger French Les Glenans sailing school. Glenans Irish Sailing Club offers courses in cruisers, catamarans, dinghys and windsurfing. The sailing base in Clew Bay is on Collanmore Island with access from Rosmony Pier.

The National Museum of Ireland – Country Life is located in Turlough Village, 8 km east of Castlebar, County Mayo in Ireland. Set up in 2001, the museum is part of the National Museum of Ireland group of museums. The museum, exhibiting the rural way of life of the Irish people between 1850 and 1950, is located on the grounds of Turlough Park House. There are displays on the home, the natural environment, trades & crafts, communities and working on the land and water.